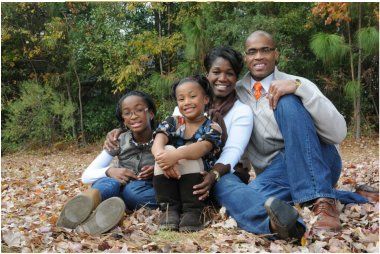 ﻿﻿﻿Van and Nicole Jones met at the University of Southern Mississippi in 1996.  They both have always had a love for children and had a dream of one day working together sharing that love.

Van Jones is a graduate of the University of Southern Mississippi. He was a member of the Men's Basketball team during his tenure at Southern Miss and graduated with a Bachelors and Masters Degree in Sports Administration.  Van has over 10 years experience in education, coaching and administration. He has worked in Hattiesburg, Laurel, Lumberton, Forrest and Lamar County Schools.  Van currently serves as the Executive Director for Pine Belt 360 a non profit organization that seeks to unify the Body of Christ.

Nicole Jones is also a graduate of the University of Southern Mississippi. She earned a degree in Business and worked as an insurance claims adjuster for 8 years.  During that time Nicole served at her church in the Youth Ministry. In 2008, Nicole devoted herself to full time ministry and family.  She served as a Children's Ministry Director from 2008 until 2010. She currently service as a Director at A.S.A.A.P.

Van and Nicole currently reside in Hattiesburg and have 2 daughters, Vanessa and Sydni. In 2010 the Lord led Van and Nicole to step out on faith and embark on a ministry that focused on their love for children, and thus ASAAP was started.
﻿﻿﻿